A brand history of The Ice Co 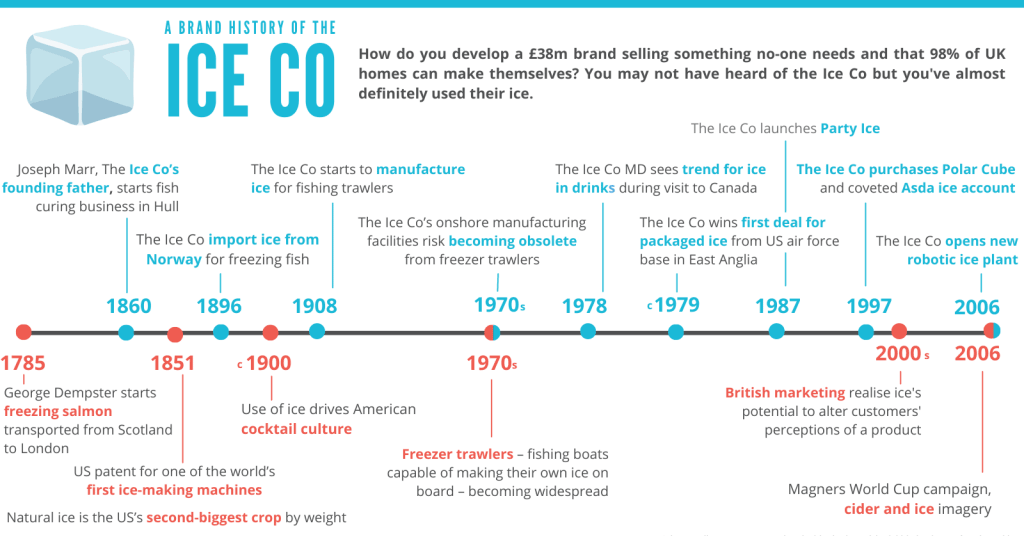 As marketers, we love to use the likes of Apple and Tesla as trendy examples of companies that succeed thanks to innovative products and marketing. But how do you build a £38 million brand selling something that no-one needs, everyone can make themselves and disappears as soon as you use it?

You may not of heard of The Ice Co but you’ve definitely used its ice, either in a pub or restaurant or from the pre-packaged bags in supermarket freezer aisles. It’s a story of changing customer needs, identifying consumer trends and opportunities and seizing competitor advantage.

98% of UK households have a freezer and can make ice at home. But The Ice Co still produces 400 tonnes of it from their sprawling manufacturing plant with robot production line.

The story starts in 1860 when Joseph Marr, The Ice Co’s founding father, started a fish curing business in Hull. By 1896, they were importing ice from Norway to freeze fish being brought onshore.

Natural ice was big business. In the mid-1800s, natural ice was the US’s second-biggest crop by weight (only more cotton was transported by train or boat) and even in the early 1900s, the neighbourhood iceman was seen around as much as the postman and milkman. But technical innovations were to change all this.

In 1851, the first US patent for one of the world’s first ice-making machines was registered. By the 1900s, cocktail culture was driving the demand for ice in America.

On the other side of the Atlantic, technological changes were changing how The Ice Co did business. In 1908, they started to manufacture ice for fishing trawlers but by the 1970s, this business model was seriously under threat.

Freezer trawlers were becoming widespread and capable of making their own ice. Within a few years, The Ice Co faced becoming obsolete.

On a trip to Canada in 1978, The Ice Co’s Managing Director noticed how every bar served ice in drinks. If there was a demand for drinks ice in coldest Canada, was there a market for it in the UK?

An ice machine was imported but it wasn’t until The Ice Co won their first deal for packaged ice from an US air force base in East Anglia that this potential became commercially viable.

The suitably named Party Ice was launched in 1987 and was one of the first consumer packaged ice products in the UK. Now you’ll see it in almost every supermarket freezer. Drinks companies realised the potential of ice to change consumers’ view of their products and marketers seized upon this. Think of Magners cider and you probably still recall the images of cider and ice from their summer World Cup campaign.

Although The Ice Co produces 400 tonnes of ice per day from its state-of-the-art manufacturing plant opened in 2006, there are risks to its business model. Consumer awareness of carbon footprints, Covid hitting bar and restaurant trade and changing consumer tastes to name but three. How the 200 year old ice industry adapts will be interesting.

Inspired by Super cubes: inside the (surprisingly) big business of packaged ice